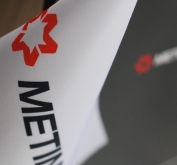 Following a request by the non-recognised republics to re-register legal entities in the so-called “DNR” and “LNR”, Metinvest declares a complete loss of control over the operations of all assets in the temporarily non-controlled territory (NCT).

Unidentified people arrived at the Group’s enterprises and demanded that the assets be re-registered under the jurisdiction of the non-recognised republics and started an inventory process. Employees were physically threatened in case of defiance. As Metinvest cannot place its employees at risk, and violate the laws of Ukraine, the Group considers it impossible to continue any economic operations at these enterprises. This statement relates to the operations of Private Joint Stock Company (PJSC) Yenakiieve Steel (including its Makiivka branch, PJSC Makiivka Iron and Steel Works), PJSC Yenakiieve Coke, PJSC Khartsyzk Pipe, PJSC Komsomolske Flux, PJSC Krasnodon Coal, PJSC Donetsk Coke and the Ukrainian-Swiss joint venture Metalen Limited Liability Company.

"The decision to cease operations at our enterprises in the territories of the so-called “DNR” and “LNR” is a forced move, caused by our absolute disagreement with a demand to change Ukrainian jurisdiction. Moreover, in this situation, we are unable to control the activity of the enterprises, and, correspondingly, bear responsibility for developments on their territories.”

At the very beginning of the conflict in the Donbas region, Metinvest’s enterprises in the NCT were re-registered in territory controlled by Ukraine. In 2016 alone, they transferred around UAH1.4 billion to budgets on various levels in the country. They employed over 20,000 people. Employees affected will be offered positions at Metinvest’s enterprises in the territory controlled by Ukraine – Zaporizhya, Kryvyi Rih and Mariupol – and labour relations will be settled in accordance with Ukrainian legislation throughout.

The Group will apply to the Ukrainian state authorities and international organisations for protection of its rights in this matter.